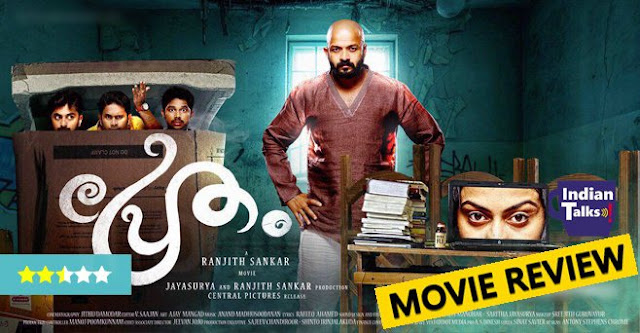 Review: Mollywood audience have been shy when it comes to accepting horror films per se, and it’s probably why a majority of the movies in the genre comes with a dollop of humor. In his latest movie Pretham, director Ranjith Sankar packs it to the brim with fine funny moments and camaraderie between its characters, making the so-called horror elements much easier to digest.
Story: Pretham Movie Story was Priyalal, Denny Kokken, and Shibu Majeed, the three college friends decide to have a reunion and come together for a fun-filled vacation. But they experience some unusual incidents during their holiday.The trio seeks the help of a priest, who introduces them to John Don Bosco, a mentalist. John’s entry totally changes the situation and turns their lives upside down. The movie depicts how the mentalist influences the trio’s life.
Performance: Actor Jayasurya has played John Don Bosco to near perfection. He has portrayed the different role with at most balance and surely deserves a special applause. Aju Varghese-Govind Padmasoorya-Sharafudeen trio steals the show with their exceptional comic timing. The rest of the star cast, including Shruthi Ramakrishnan, HarishPerady, Pearle Maaney, Vijay Babu, Dharmajan, etc. are good in their respective roles.
Verdict : The Pretham film is a good a complete entertainment package and one of the best horror movies in Malayalam film industry with ample amount of suspense.breezy watch with enough laughs and fresh story elements to keep you engaged throughout.
Advertisement