Stay Calm and catch our Prime Minister Narendra Modi & Bear Grylls on Discovery‘s Man Vs Wild as they venture into Indian wilderness to create awareness about animal conservation and environmental change. The PM Narendra Modi wild with Bear Grylls episode will air on Discovery Channel India on 12 August at 9 pm and its gonna be your highest rating show across the world.

After Barack Obama, Bear Grylls British Show ‘Man vs Wild’, will soon feature the Prime Minister Narendra Modi in an episode. The news was confirmed by renowned adventurer on Twitter, who said that he met PM Narendra Modi in India and discussed “awareness about animal conservation & environmental change”, in the episode. As per the report, the Uttarakhand Forest Department had canceled all tourist bookings for the Dhikala forest due to PM Modi’s visit to the state.

Bar Grylls also talked about the episode and said, “It is such a privilege to be taking Prime Minister Modi on an adventure into the Indian wilderness and I feel truly honoured to get to spend time with this remarkable world leader. The wild reminds us that we need each other and that together we are stronger. I am so excited to spend time with the PM and to get to know the man who leads this great nation.”

People across 180 countries will get to see the unknown side of PM @narendramodi as he ventures into Indian wilderness to create awareness about animal conservation & environmental change. Catch Man Vs Wild with PM Modi @DiscoveryIN on August 12 @ 9 pm. #PMModionDiscovery pic.twitter.com/MW2E6aMleE

The show is known for its host Bear Grylls’ survival techniques in extreme conditions and his love for flora and fauna. In the 45-second teaser video, a voiceover introduces Modi as the head of the largest democracy in the world. It further shows Modi welcoming Grylls in India, and then taking a trip to the interiors of India together. At one point in the video, Grylls gives Modi a jacket to keep him safe. The video promises a fun ride into the diverse wildlife of India and how to reach there through different means. 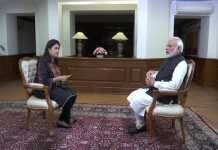