Indian PM Narendra Modi Attended IIT Madras Convocation Ceremony 2019: Prime Minister Narendra Modi has said, hackathons help youngsters to find solutions for global problems with innovative ideas. PM Modi participated in the prize distribution function of the second India-Singapore Hackathon held in Madras IIT this morning. In his address, he said the solutions found in this edition of the hackathon are start-up ideas for tomorrow.

PM Narendra Modi lauded the students who took part in the Hackathon saying they have attempted at solving many problems being faced by the public today. PM Modi said the development of a camera to detect who is paying attention in a forum might be very useful to legislative bodies like the Parliament.

Prime Minister Narendra Modi congratulated the winners of the Hackathon and all the other participants saying, their willingness to confront challenges and find workable solutions is of much great value than just winning a challenge. PM Narendra Modi is now attending the 56th convocation of the Madras IIT.

Addressing the convocation ceremony of IIT Madras, PM Narendra Modi said, “IIT Madras is a prime example of how a decades-old institution can transform itself to meet the needs and aspirations of the 21st century. 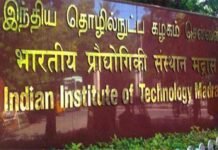