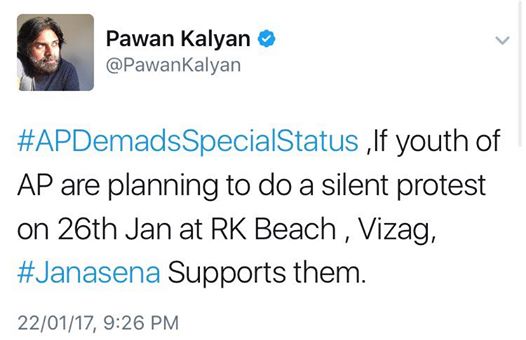 Jana Sena Party leader Pawan Kalyan has come out in support to the youth of Andhra Pradesh who planning to do silent protest on AP Special Status at RK Beach, Vizag, on January 26th. Pawan Kalyan took his official twitter account and tweeted,#APDemandsSpecialStatus, If youth of AP are planning to do a silent protest on 26th Jan at RK Beach, Vizag, #Janasena Supports them.

“JanaSena raises its ‘Voice against Opportunistic, Divisive & Criminal Politics; through a Protest Musical album “#DeshBachao !”.“#APDemandsSpecialStatus, I had planned a Musical protest album #DeshBachao to be released on 5th Feb but will prepone its release to 24th Jan.” tweeted by Pawan.
As soon as PawanKalyan tweeted, in no time, it became a rage and the issue started trending Nation wide.After the Centre cleared Tamil Nadu state government’s ordinance to conduct its cultural bull taming sport Jallikattu that was banned by Supreme Court, the demand for Special Status to AP gained significance.
Advertisement
Advertisement