Theprimetalks.com
Home Tollywood Pawan Kalyan Full Interview With Anupama Chopra For Film Companion
Advertisement
Pawan Kalyan Full Interview Anupama Chopra : Pawan Kalyan who is known for his reclusiveness has never given any interviews all these years. It is very seldom you get to see this T-Town star giving interviews to the media channels. However, he is given the nod for the interview with Anupama Chopra for Film Companion recently in Hyderabad. The fans of Pawan Kalyan are waiting for the interview ever since. Even the fans were asked to put their questions across which they wanted to listen from their Favorite star. Most of them have tweeted their questions on twitter.
Advertisement 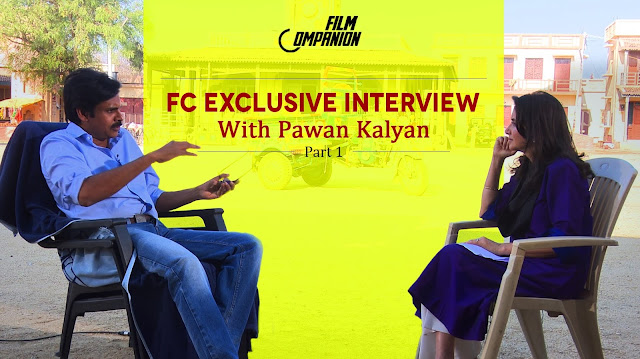 Film Companion is a celebration of the movies. It’s a platform for film lovers by film lovers. Anupama Chopra interviews the Celebrities about various things and she mostly interviewed the B-Town stars until now. She has also written many books on Indian Cinema and has been a film critic for NDTV, India Today, the Hindustan Times. She also hosted a weekly film review ‘The Front Row with Anupama Chopra’. She is also the wife of the famous Hind Film Producer Vidhu Vinod Chopra.
On 7th March, She has flown down to Hyderabad and interviewed Pawan Kalyan on the sets of Sardaar Gabbar Singh. Ever since then, the fans are eagerly waiting for the interview. Now the Film Companion has released the videos on their Youtube Channel at 2 PM. It is said that the interview will be telecasted on NDTV at 4.30pm today. Since the videos are out, fans can check and watch the interview here…