“The Limca Book has recorded that Paradise Food Court has sold over 70,44,289 biryani servings between January 1, 2017, and December 31, 2017…The achievement is recorded in the 2019 edition of the Limca Book of Records 2019,” the Paradise Restaurant Hyderabad said in a press release issued last week.

The Paradise Restaurant also bagged the award for the ‘Restaurant serving the best Biryani’ at the Asia Food Congress held in Mumbai. The chairman of Paradise food court, Ali Hemati, was also given Lifetime achievement award for his contribution to food, restaurant and hospitality services.

“Entering the Limca Book of Records and being rated as the Restaurant Serving Best Biryani by the Asia Food Congress give us twin joy, and a testament to the love our loyal customers shower on us,” Gautam Gupta, CEO, Paradise Food Court, told Business Line. 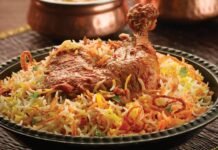 Paradise Hotel in Medipally Seized after insects found in biryani