2018 biggest internet sensation actress Priya Prakash Varrier Most Searched Personality on Google India 2018 and her journey has just started. Priya Prakash Varrier seen in her first Malayalam film Oru Adaar Love Release Date Fixed on 14th February 2019 on the occasion of Valentines Day. Omar Lulu tweeted the Oru Love release date on Thursday. He wrote, “2019 FEB 14 Valentines Release,” along with a new poster of the film. Oru Adaar Love poster featured a teacher writing notes on the blackboard, while a girl and a boy are seen holding hands in the class.

Oru Adaar Love’s song Manikya Malaraya Poovi, which featured infamous wink and the flying kiss that made actress Priya Prakash Varrier and actor Roshan Abdul Rahoof famous has already created a hype around the film. Following this, a case was filed against and Priya Prakash Varrier for hurting religious sentiments. The complaint was filed in Hyderabad after a resident of the city misunderstood the meaning of the song.

The song is a   (Kerala folk song) composed by Thalassery K Refeeque while the lyrics were penned by PMA Jabbar. It is usually sung at weddings in the Malabar region. The recreated version was composed by Shaan Rehman.

After the song success on social media and the resulting popularity of
Priya Prakash Varrier, director Omar decided to increase the length of Priya and Roshan’s characters in the film. The film also stars Siyadh Shajahan, Noorin Shareef, Arun, Mathew Joseph, Siddique, and others. 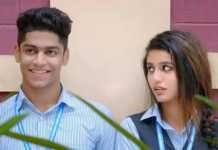 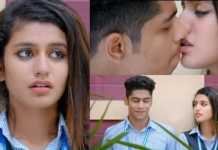 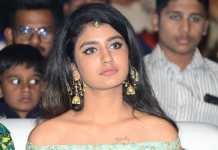