Orey Baammardhi movie stars GV Prakash Kumar, Siddharth, Lijomol Jose, and Kashmira in the lead roles and written and directed by Sasi and Music composed by Siddu Kumar, the cinematography is done by Prasanna Kumar and it is edited by San Lokesh has released in theaters under Sri Lakshmi Jyothi Creations. Check Out Orey Baammardhi Movie Review, Rating, Story, Verdict.

Orey Baammardhi Story about Rajasekhar (Siddharth) is sincere traffic police who catches a bike racer named Madan (GV Prakash) for breaking several traffic rules in the city. He also insults him big time and hands over them to the cops. But in a tragic turnaround of events, Rajasekhar gets married to Madan’s sister. This does not go well with Madan and he tries to spoil his sister’s marriage. Will he be able to do it is the basic plot.

Siddharth played the role of Rajasekhar as an honest traffic policeman. He looked very mature enough to fit the character. GV Prakash impresses with his unique performance as a passionate young man who is interested in bike racing. Especially the war episodes between Siddharth and Prakash and the racing scenes are impressive. Although Director Shashi told the story interestingly in the first half and he got stuck in the second half. The pre-interval and interval blocks are good and hero Siddharth’s acting stands out.

Overall, Orey Baammardhi is a Good Concept, and the backdrop of the film is pretty interesting. Siddharth is seen as a traffic cop and he impresses big time. In a serious role, GV Prakash as the rash bike racer was also very good. 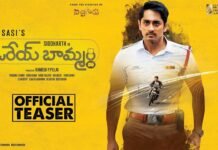 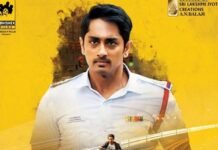