Actress Tamannaah Bhatia plays the role of an ethical hacker named Anuradha, daughter of crime novelist Ganeshan, an Alzeheimer patient. The story takes an interesting turn when a woman is murdered at her old house and her father is implicated in the case. Sudalai (Aruldoss), investigating officer, and forensic pathologist Yesu (Pasupathi) see Ganesha’s involvement in the case and Anuradha is trying hard to save her father. who is suspected to have committed a murder mystery? to know watch November Story Online on Hotstar. 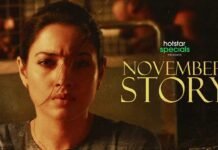