After making a digital debut with 11th Hour, Tamannaah Bhatia is back with another web series titled November Story. The show is directed by Ram Subramaniam, will release in Tamil, Telugu, and Hindi on May 20. Ahead of the release, the November Story Trailer is out, November Story follows the life of Anuradha who tries to prove that her father is innocent.

Judging by the November Story Trailer at the centre of the murder investigation is an acclaimed crime story writer who is now suffering from early Alzheimer’s. All the evidence seems to be pointing at the culpability of the writer. But, looks can be deceiving and more so in murder-mystery shows. It seems the accused writer’s daughter, played by Tamannaah Bhatia, takes it upon herself to get to the bottom of the truth and prove the innocence of her father.

Tamannaah Bhatia about Her Character in November Story:

In a statement, Tamannaah Bhatia said, “Anuradha is a young, independent, fearless and intelligent woman who takes it upon herself to save her father from being punished for a cold-blooded murder. Portraying such a strong female character who is the hero of the story was one of the most gratifying experiences in my career so far. With its compelling storyline and unique narrative, November Story will keep audiences on the edge of their seats and hooked till the end as the mystery around the murder is uncovered.” 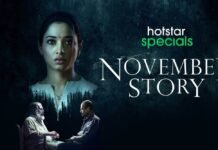