Now, a new teaser for the upcoming 25th installment in the Bond franchise, No Time To Die Teaser has arrived on YouTube. Although it doesn’t give fans much information yet, besides putting Bond in a variety of beautiful locations and alongside fancy cars, the No Time To Die Teaser (embedded below) does reveal when a full and No Time To Die trailer will drop: Wednesday, December 4th, just three days from right now.

As the most expensive James Bond film ever shot, No Time To Die is beginning to look like it’s planning on sending Daniel Craig off in a grand style. With a villain played by Rami Malek and a plot which will be attempting to tie up all of the loose ends from Craig’s previous Bond entries, fans are expecting a lengthy and bombastic journey when No Time To Die finally hits theaters.

Fans will surely miss Daniel Craig’s version of James Bond. Although the actor was lambasted when he was originally cast for 2005’s Casino Royale for not having the physical characteristics James Bond usually does (described at length in Fleming’s books) it wasn’t long until popular opinion turned and even the majority of long-time fans embraced him in the role.

While reports are currently circulating which say Lashana Lynch will replace Craig as a new female 007, she has yet to confirm these rumors, so right now no one is entirely sure who the next James Bond will be. One thing is certain, however: Wednesday, and the full No Time To Die Trailer, can’t get here soon enough. 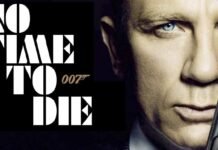 No Time To Die Release in 4 Indian Languages