Prime Minister Narendra Modi said the new education policy 2020 announced by the government emphasizes making ”job creators” instead of ”job seekers’‘ and is an attempt to transform the intent and the content of the country’s education system. PM Narendra Modi Addressing the finale of the Smart India Hackathon, he said the National Education Policy 2020 facilitates inter-disciplinary study which will ensure that the focus is on what the students want to learn.

“The 21st century is an era of knowledge. This is the time for increased focus on learning, research, innovation. This is exactly what India’s National Education Policy 2020 does. We are focussing on the quality of education in the country. Our attempts have been to make our education system the most advanced and modern for students,” PM Narendra Modi told students at a virtual interaction.

Elaborating on the Centre’s attempts to transform the content and method of imparting education in the country, PM Narendra Modi said, “The New Education Policy 2020 announced earlier this week emphasizes on the inter-disciplinary study, which will ensure that the focus is on what the student wants to learn instead of being compelled to learn.”

He explained that the new education policy is about the spirit which reflects that the country’s students are gradually shifting from the burden of the school bag, which does not last beyond school, to the boon of learning which will help them for life, from simply memorizing study matter to encouraging critical thinking. He said the role of the youth was important for the nation to achieve its target of improving the ‘ease of living’ to provide a better life for the poor and needy. 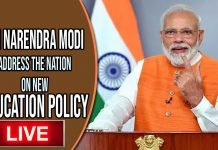