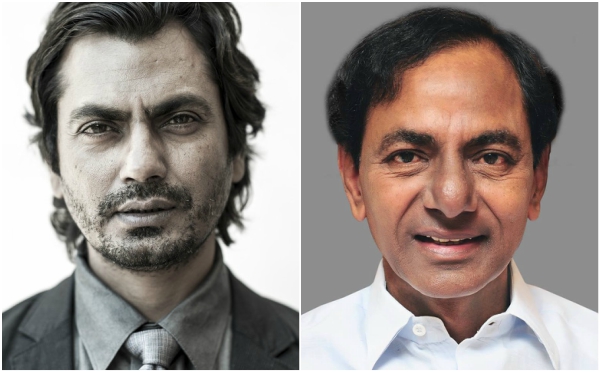 Telangana CM KCR Biopic: In 2016, filmmaker Madhura Sreedhar had made an announcement that he would produce a biopic on the Telangana State Chief Minister, K. Chandrasekhar Rao aka KCR, and the pre-production works on the biopic were underway. The latest reports seem to have different indications.
According to a report in Times of India, Bollywood acclaimed actor Nawazuddin Siddiqui might be roped into play KCR in his biopic. “The makers are considering three actors at this point and Nawazuddin tops their list because of his uncanny facial resemblance to KCR and acting prowess, of course.
They want to be fully prepared with the script and other modalities before they formally approach him. However, Nawaz is already aware of the makers’ interest in casting him and he has started watching KCR’s videos to pick up his mannerisms,” a source close to the unit was quoted in the report.
Nawazuddin Siddiqui was recently in Hyderabad to promote his upcoming film Babumoshai Bandookbaaz and showed the keen interest in taking a glimpse of the CM Camp Office too. Responding to these, Nawazuddin Siddiqui said, “As of now, I have no information regarding it. Great films are made in the South, and if I am offered a good script, I will definitely lap it up.”
The biopic is said to bring things into light about KCR which not many are aware of. as per reports, the film might go on floors as soon as the cast is finalized by the makers. If Nawazuddin is roped in for this biopic, then this will be a great move for the makers considering the kind of image the actor has across India.
Facebook
Twitter
Pinterest
WhatsApp
Telegram
VK