The Music composer-turned-actor Hiphop Tamizha’s Naan Sirithaal First Look Poster Released Out. Naan Sirithaal Film is Touted as a comedy entertainer, the film has been bankrolled by Sundar C and N Manivannan under the banner of Avni Movies. On the occasion of Ayudha Pooja, the first look of NaanSirithaal was revealed on social media.

Naan Sirithaal Movie First Look Poster, Adhithya can be seen as an injured face with a happy face. He seems to be playing a different character as is visible from the actor’s face. The film stars Tamizh Padam 2-fame Iswarya Menon as the female lead. On the music front, Hiphop Tamizha has Vishal’s Action waiting for release.

Going by the title and the first look, it can be inferred that the film has been inspired by Raana’s own short film, Keka Beka. Aadhi is expected to reprise Kishore Rajkumar’s role as the person suffering from a medical condition which makes him laugh at serious and sad moments. 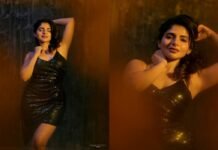