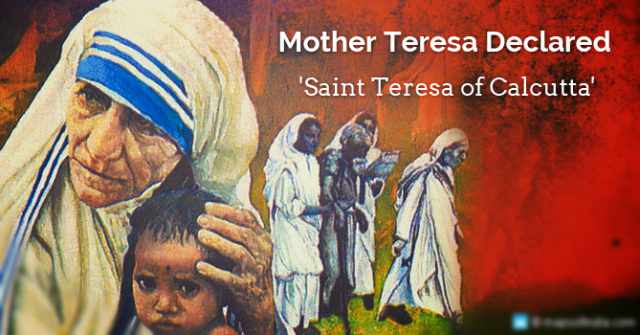 The September 4th, 2016, On Sunday, Pope Francis conferred the honour of sainthood on Mother Teresa. This is one of the highest honours that the Catholic Church is allowed to bestow on an individual. Known as “saint of the gutters”, Mother Teresa who made Kolkata her spiritual home was heaped immense praise by Pope for the way she dedicated herself to uplifting the condition of people rejected by the society – the so-called outcasts.

He also lavished praise on her for the way her work created a sense of shame among the global leaders for the poverty that they had created with their actions. Pope Francis also praised her for the way she changed the church into a hospital, to help those who were suffering from both spiritual and material poverty, and those suffering from basic existential problems.
Advertisement
Area of Emphasis for Pope Francis : As a religious leader, Pope Francis himself has always been devoted towards serving the people largely marginalized by the society, like prostitutes, prisoners, refugees, homeless people, and the like. It is, perhaps, in such a vein that a connection can be established with Mother Teresa being now canonized as St. Teresa of Kolkata. It is basically celebrating her life and work and also affirming the areas that have been prioritized by Pope Francis.
Incidentally, Pope Francis has earned both bouquets and brickbats for this. However, he has clearly modelled himself on Mother Teresa. He lives a simple life and serves the poor selflessly. He does not stay at the Apostolic Palace meant for someone of his stature, instead preferring to stay at a room in a hotel meant for refugees. In an age when personal gratification and complete disregard for the unborn, old, and poor is the order of the day, this is something to be celebrated rather than questioned.
Reception back in Kolkata : The Mass of canonization was streamed live and was watched by hundreds of people at the Mother House in Kolkata. They burst onto claps when Mother was canonized as a Saint. On the day her tomb was decorated with a photo of hers in the later stages of her life, a candle, and many flowers. People in attendance expressed their pride at being able to witness the historic event unfold and at the recognition being granted to Mother Teresa.
Life of Mother Teresa : Mother Teresa was born on 26th August 1910 as Agnes Gonxhe Bojaxhiu. She arrived in India in 1929 as a sister belonging to Loreto Order. It was in 1946 that she admittedly got the divine call that asked her to come to Kolkata (then Calcutta) and tend to ones that were not wanted or loved, and those that were at the very bottom of the social heap. She established Missionaries of Charity, a sisterhood of nuns dedicated to this aim. It became one of the most prominent names of its kind across the world.
Missionaries of Charity had around 4000 sisters, all of whom wore the trademark white saris with blue borders. They worked as per Mother’s instruction to perform “small things with great love”. It has also become a global order with nuns, brothers, priests, and co-workers, who are basically ordinary people. She received Nobel Prize in 1979. After her death, the process of her sainthood was prioritized by St. John Paul II.