Money Heist Season 5 First Look Pictures show the heist turning into an all-out war, with the Gang all armed and ready to fight for their lives. We see the Professor face-to-face with Sierra as she finds his hideout, and Lisbon safe inside the bank again.

Money Heist follows the story of a gang of robbers who pull off elaborate bank heists masterminded by the mysterious Professor. In the Money Heist final season, the Gang has been locked down in the Bank of Spain for over 100 hours and ends up facing a powerful enemy: the army. 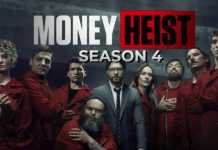