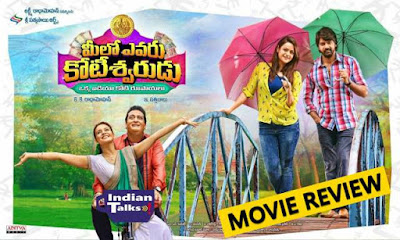 Meelo Evaru Koteeswarudu movie ” story revolves around a youngster (Naveen Chandra ) who falls in love with a beautiful lady(Shruti Sodhi) and he is trying to impress her father. The hero is a well-educated guy and comes from a poor family whereas the heroine is the daughter of a big businessman. In the meanwhile, hero and heroine come together and fall in love with each other.

To impress heroine father Hero tells an idea to businessman to earn 1 Crore rupees. What is that idea? How they earn ! 1 Crore is remaining story plot. The movie had two separate love tracks one features Naveen Chandra and Shruti Sodhi as feed good romance and Another is Prudhvi and Saloni Love track is hilarious to watch. Both the love tracks showed in a different manner.

Hero Naveen Chandra is superb as Prashanth and he performed well. He looks good on screen and might be addictive to girls. Sruthi Sodhi is good and she is so glamorous and her performance is good. Posani Krishna Murali is superb. Dhanraj hilarious and tickle audience when he is on screen. Murali Sharma is nice and he did Justice to his role as a rich businessman. Prabhas Sreenu as production manager is good. Raghu Babu as a director who gave series of flops is superb. Prudhvi is hilarious and he makes theater erupt with his mannerisms and dialogues.