Mathu Vadalara is a crime comedy thriller film and debutant director Ritesh Rana has written the script and dialogues for the movie, which has been produced by Chiranjeevi and Hemalatha under banners Mythri Movie Makers and Clap Entertainment. Mathu Vadalara received a U/A certificate from the censor board and its runtime is 2.11 hours.

Mathu Vadalara Movie Story: Babu is a delivery boy living with his friends Yesu and Abhi. Due to his meager salary, he decides to quit, but then Yesu gives him an idea. The idea, however, soon spirals out of control and Babu finds himself deep in trouble. Will he survive the circumstances of his own actions? 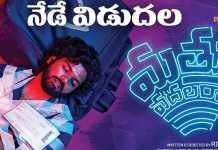