Telugu television audience will very soon witness a show of its kind. ‘Mana Ambedkar‘, the Telugu dubbed version of the popular Marathi show ‘Mahamanavachi Gauravgatha’ is all set to entertain from September 21 (Monday). Zee Telugu is set to present a never told before life story in the Telugu GEC space of this extraordinary personality, his crusading spirit, and how he became the precursor of united India, with its powerful socio-drama titled Mana Ambedkar. The show is an inspirational story of India’s first Minister of Law and Justice; and his journey from the tender age to be the messiah of the downtrodden and becoming the father of the Indian Constitution.

There is a well-known saying that ‘Great leaders don’t set out to be a leader, they set out to make a difference’. One such leader in the Indian history, who hailed a revolution and become a voice to reckon with is, Baba Saheb Dr. Bhimrao Ramji Ambedkar – the founding father of the Indian Constitution and also served as independent India’s first law and justice minister besides being the architect of the Constitution of India. A leader par excellence who has etched a prominent place in millions of Indian hearts and whose legacy is unparalleled.

Mana Ambedkar Serial featuring Sagar Deshmukh playing the titular role will chronicle the life of Baba Saheb Dr. Bhimrao Ramji Ambedkar, from a tender age to becoming the father of the Indian constitution. “The character was challenging for me. Basically, I love to accept the challenge that is the reason I have decided to play this character. At one point, I thought it was interesting because I have previously played P.L. Deshpande’s character. After that I wanted people to watch me playing Dr. Babasaheb. I have never done a biopic on television,” Sagar Deshmukh told ETimes-TV.

Since the release of the Mana Ambedkar title song and the promo, Telugu audiences welcomed the concept with open arms and are looking forward to the series. The Mana Ambedkar Serial premiere on September 21st, 2020 at 5:30 PM every Monday to Saturday only on Zee Telugu and Zee Telugu HD. 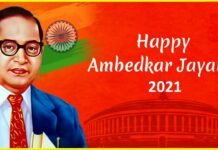