A man attempted suicide at Chaitanyapuri Metro station Hyderabad, Telangana on Saturday. Gravely injured, his identity is still unknown and he is undergoing treatment at Osmania General Hospital, said the Saroornagar police. A man climbed the stairs, reached the concourse level of the metro station and jumped down. Security personnel rushed him to Osmania General Hospital.

A complaint received by the Saroornagar police said the controller of the metro station, Mr. Hari Krishna Reddy, noticed a Man Attempted Suicide by Jumping from Chaitanyapuri Metro Station. “Though other staff noticed the person and shouted, he did not stop and jumped from the Arm-B side,” the complaint stated.

Saroornagar sub-inspector G. Manmadha Kumar said no one had approached the police regarding the victim. Hyderabad Metro Rail Limited (HMRL) managing director N.V.S. Reddy said, “A person in tattered clothes, in a highly inebriated condition jumped down on to the road from Chaitanyapuri Metro station concourse level in an attempt to commit suicide. He was taken to hospital by L&T staff and is being taken care of by doctors. He is safe and recovering.” (Also, Read Couples Kissing Inside Metro Station)

However, police are waiting for his recovery to know more details. Only after he recovers and speaks, can the details of his identity and the motive be known? As he didn’t have a metro ticket, it is not clear if he was on his way to board a metro. Meanwhile, hospital sources said that the victim is still in an unconscious state and his condition is being monitored. 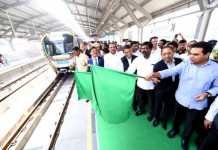 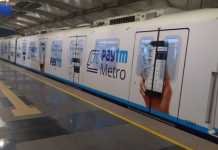 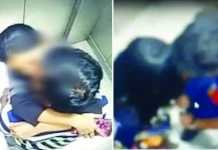