Congratulating Mamata Banerjee on her victory, Governor Dhankhar said, “I express hope that governance will be according to the rule of law. We are in a very difficult situation, we are also getting reports from abroad about the violence taking place in the state. We must bring an end to this violence, I will be in touch with the CM over the same. I hope the CM will take all steps to restore rule of law.”

The oath-taking ceremony was held in a subdued manner amid the COVID-19 pandemic with 67 invitees. Notable guests who were invited to the ceremony include former CM Buddhadeb Bhattacharjee, BJP state President Dilip Ghosh, Congress MP Adhir Ranjan Chowdhury, poll strategist Prashant Kishor, and others. 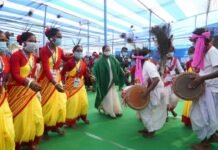 Mamata Banerjee Dance with Tribes during A Mass Wedding Ceremony