West Bengal Chief Minister Mamata Banerjee was seen shaking a leg during a mass wedding ceremony in the Alipurduar district of the state. The 45-second video clip, which is being widely circulated online, features the 66-year-old politician Mamata Banerjee matching steps with the Santhali dancers at the ceremony. Clad in masks, the dancers are seen holding Mamata Banerjee’s hand and dancing to the beats of the dhol. Mamata Banerjee Dance with Tribes during Mass Wedding Ceremony has gone viral on social media.

A Video of Mamata Banerjee dancing during a mass wedding Ceremony has been posted by news agency ANI. The video shows Mamata Banerjee joyfully dancing along with the other dancers. She then leaves the dancers’ group and moves away to another group of dancers.

Watch Video of Mamata Banerjee Dance with Tribes during a Mass Wedding Ceremony.

Addressing the gathering in Hindi, Chief Minister Mamata Banerjee said that in the next three years, workers of each tea garden of the hills, Terai and Dooars will be included in the ‘Cha Sundari’ project. 500 crore rupees has been allocated for the said project. Invitation letters of the ‘Cha Sundari‘ project were handed over to 4,600 labourers in Alipurduar, Darjeeling, and Jalpaiguri districts.

Mamata Banerjee also handed over housing certificates to tea garden workers just a day after Union Finance Minister Nirmala Sitharaman announced a ₹ 1,000-crore package for tea gardens in the Union Budget 2021. Tea gardens are an important constituency in states like West Bengal, especially North Bengal and Assam, where polls are due by May. 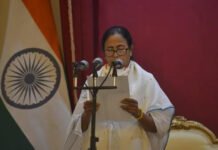