Bollywood Hot actress MallikaSherawat posted a selfie on her Twitter . And guess with whom she is posing this time? None other than US President Barack Obama.Sherawat, in what can be called a power play, has posted pictures with Obama at regular intervals.

Had the good fortune of meeting the one and only,the charismatic president Obama again :)! #PresidentObama pic.twitter.com/UdoBvb3LTF

“Had the good fortune of meeting the one and only, the charismatic President Obama again,” Mallika tweeted on Wednesday, calling it a “proud moment”.

Mallika, however, did not reveal where and when she met Obama this time. She had earlier met him in 2011 a tea party in Los Angeles. 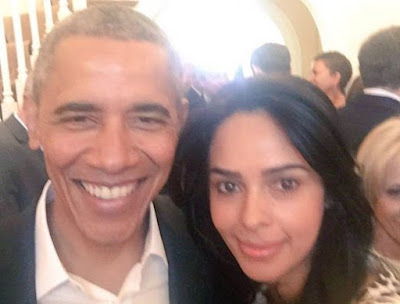 The actress is known for her bold performances in films such as ‘Khwahish’ and ‘Murder’, and was last seen on screen in the 2015 film ‘Dirty Politics’.Her career in Bollywood may not be noteworthy, but her PR team is definitely strong  for getting her all these chances.

Is that The president of The United States of America while I am busy posing:)?! #presidentobama#obama#michelleobama pic.twitter.com/LUZPGfqpmz