London Confidential full Movie Story about Biren Ghosh (Diljohn Singh) a secret RAW Agent from India is killed when he makes contact with a source who has proof that China is planning to release another pandemic level virus on the Indo-China border. Uma (Mouni Roy) another RAW agent is tasked with finding the evidence again but also to find out the mole inside the agency who leaked information about Biren to the Chinese secret agency MSS. In this mission she gets help from a secret agent Arjun (Purab Kohli) and the Indian ambassador in London Nirupama Das (Kulraj Randhawa).

London Confidential film will keep you hooked right until the end not just because the story reveals very little at any given time. More importantly, the fear of another deadly virus can seem incredibly real, while we are already living in one pandemic. Another commendable takeaway from this film is how both countries India and China, are in a bid to outdo each other but there is a strong sentiment of avoiding an all-out war at all costs. 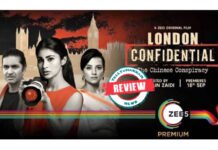