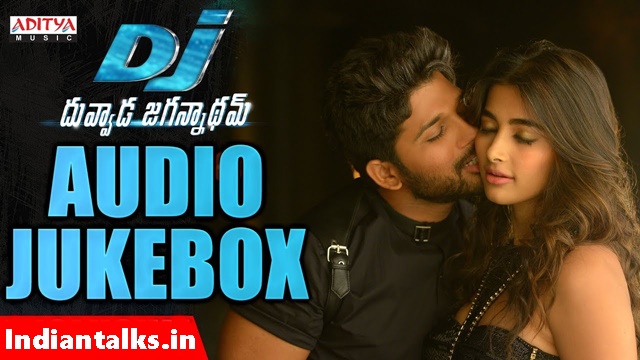 DJ Duvvada Jagannadham Full Audio Jukebox Songs: listen to the full songs Jukebox of the film DJ – Duvvada Jagannadham an upcoming Telugu film directed by Harish Shankar. Allu Arjun, Pooja Hegde are the main casts of the movie.The Music of the movie is composed by Devi Sri Prasad and the Cinematography has been handled by Ayananka Bose. The film is produced by Dil Raju under the Banner Of Sri Venkateshwara Creations. (DJ Movie Review & Rating)
The #DJ audio album has five songs while Jonnavithula, Sahiti, Shree Mani, Balaji, and Bhaskarbhatla have provided lyrics to one song each.Sagar, Geetha Madhuri, Jaspreet Jasz, Rita, Nakash Aziz, MLR Karthikeyan, Chitra and Vijay Prakash are the singers who have sung the songs of the film.Two songs which were released earlier have become instant hits and we can expect a stunning response from the DJ Jukebox.