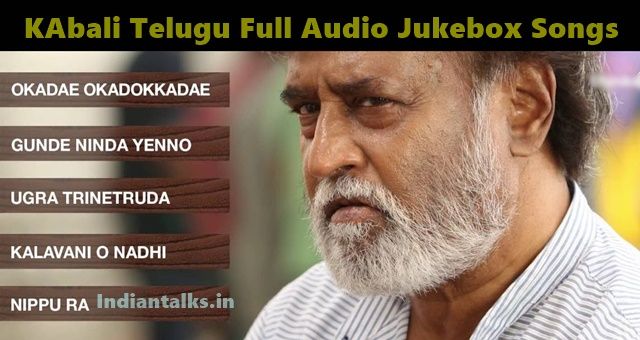 Kabali Telugu Full Songs Jukebox: The much most awaited music album of ‘Kabali’ Telugu movie has been revealed. The album has five songs composed by Santhosh Narayanan. The film marks the first collaboration of Super Star Rajnikanth with Santhosh. The songs are all power packed and is sure to increase the hype of the film and energy levels of the superstar fans. The Think Music has acquired the audio rights for all three languages of film – Tamil, Telugu, and Hindi. Listen to Kabali Telugu mp3 Songs here..!!
The most awaited upcoming Kabali Tamil Audio featuring superstar Rajinikanth had been released by the Kabali movie makers recently.Fans of the Telugu industry were very disappointed that the Telugu audio had not yet been released. Now to make the Telugu fans very happy, The Filmmakers are gearing up to release the Kabali Telugu audio. The Telugu audio of the movie is going to be launched today 26 June 2016 in Hyderabad. Kabali Tamil Full Jukebox Songs.

Advertisement
The Kabali movie is directed by Pa Ranjith and produced by Kalaipuli S Thanu. The music for the movie was composed by Santhosh Narayanan and the kabali movie had five songs in total. The movie features Radhika Apte sharing the screen space with Rajinikanth. the movie also features Winston Caho, Dhansika, Dinesh Ravi, Kalayarasan, John Vijay, Nassar and others are playing supportive roles.
Advertisement