An edge of the seat horror-comedy starring Akshay Kumar’s Laxmmi Bomb Trailer released on Friday and it is a complete laugh riot. Laxmmi Bomb Movie Cast Akshay Kumar, Kiara Advani, Tusshar Kapoor, Sharad Kelkar, Tarun Arora, and Ashwini Kalsekar. Laxmmi Bomb Remake of Kanchana directed by Raghava Lawrence, who is also directing the Hindi version. Akshay Kumar in a never seen before avatar as a man possessed by a transgender ghost and scares everyone. It promises to spread some brightness and cheer this Diwali but of course on Disney+ Hotstar.

Laxmmi Bomb Trailer starts with Akshay Kumar declaring, “Jis din sach mein mere samne bhut aayy na toh maa kasam chudiya pehen lunga.” After a dance sequence of Akshay Kumar and Kiara Advani, the duo can be seen entering her parents’ (played by Lubna Salim and Rajesh Sharma) house. What follows next are rib-tickling scenes of Akshay Kumar making the lives of the family members hard after being possessed by a ghost – not just any ghost but a transgender ghost.

During the virtual press conference announcing the Laxmmi Bomb Release date, Akshay Kumar had earlier said, “Horror-comedy is my favorite genre. I had done Bhool Bhulaiyaa before this one. I had heard this story many years ago and I always wanted to make this film. It was like my passion project, but it kept getting delayed for one reason or the other.”

From the Laxmmi Bomb official trailer, it is quite evident that Laxmmi Bomb movie is trying to balance the story with some situational comedy and songs. Watch Laxmmi Bomb Full Movie Online premieres on Disney+ Hotstar on November 9. 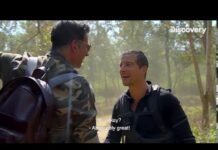