KTM 200 Duke ABS Launched in India at Rs 1.6 lakh (ex-showroom, Delhi). The KTM 200 Duke ABS is currently the most affordable motorcycle in the KTM line-up and has only been available without ABS this far. The ABS system used in the Duke 200 is by Bosch and we believe that this is a single-channel ABS system.

There are no other changes to the motorcycle and it continues to use a 199.5cc, single-cylinder motor that gets a four-valve head and is liquid-cooled. A 6-speed gearbox is standard. Power stands at 25hp and the bike uses a trellis-frame chassis along with a 43mm USD fork and a monoshock.

Other features and equipment will remain identical to the non-ABS version of the KTM 200 Duke. The bike gets the same single trellis frame painted in black, along with an aluminium swingarm. The suspension duties being handled by 43 mm USD (up-side down) WP forks up front, and a monoshock rear suspension setup. Braking duties are handled by a 300 mm disc brake up front and 230 mm disc at the rear sourced from Bybre. The bike also gets the same 17-inch alloy wheels which come shod in MRF tyres, 110 section for the front and 150 section tyre for the rear. (KTM 390 Duke Version)

The KTM 200 Duke ABS will be available in three colours – orange, white and black – across the entire KTM dealership network in India, which spans 450 outlets. The Duke 200 is KTM’s best-seller in our market. The Duke 200 is also available without ABS for Rs 1,51,757 ex-showroom, Delhi. 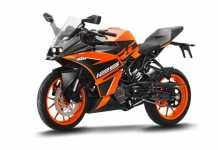