Krishna And His Leela as the title suggests is about the life of Krisha (Siddhu). The movie is about his relationship with various girls. The catchphrase of the flick ‘Based On True Rumours’ is a reflection of the same. Krishna falls in love with three different girls at various stages of his life. Unfortunately, they happen at the wrong time. Shraddha Srinath, Seerat Kapoor, and Shalini Vadnikatti play the three heroines in the movie opposite Siddhu. Each arrives at an interesting point in his life.

Ravikanth Perepu who shot to fame with debut movie Kshanam is behind Krishna And His Leela. It is his sophomore attempt and belongs to a whole new genre. Siddhu co-wrote the film along with the director. Shaneil Deo and Sai Prakash U are the cinematographers. 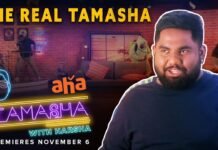