Krack is the story of Pothuraju Veera Shankar (Ravi Teja), a violent circle inspector from Andhra Pradesh. He spares no opportunity to put an end to evil activities of anti-social elements in every place he is posted. But when he’s transferred to Ongole, Shankar heads for a clash with Katari Krishna (Samuthirakani) who commits several crimes in Ongole. How the rivalry between Pothuraju Veera Shankar and Katari Krishna turns worse is what Krack is all about.

KRACK is an out and out mass masala entertainer with whistle worthy dialogues and elevation scenes which are a feast to the fans of Mass Maharaja Ravi Teja. The first half banks on the action and elevation episodes. The second half carries the momentum of the first half and two big action episodes make the film passable through the second half of Krack sounds completely predictable. Ravi Teja completely carries the film on his shoulders. The Ongole bus stand fight along with the climax stunt stands out. All the episodes between Ravi Teja and Samuthirakani have been top class.

OverAll, Krack Movie is a perfect comeback for Ravi Teja, the film will end up as a paisa-vasool film and A Mass Biryani during this Sankranti festival season and Krack proves the value of watching a pakka mass commercial entertainer in theatre. 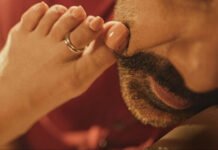