Mass Maharaja Ravi Teja’s Khiladi Movie Teaser unveiled on Monday ahead of the Ugadi festival. The visuals promise that the Khiladi​​​ film will be an action-packed crime thriller with Ravi Teja likely essaying dual roles. The Khiladi Movie Teaser has shots wherein Ravi Teja is seen walking with a hammer in his hand With a hauntingly (BGM) background score by Devi Sri Prasad, There’s even a close-up shot of Ravi Teja holding Meenakshi Chaudhary by his neck and aiming at her head.

Khiladi is set to hit the screens on May 28 and fans are expecting this film to become as big a hit as Ravi Teja’s Sankranthi release this year, Krack, is directed by Gopichand Malineni. 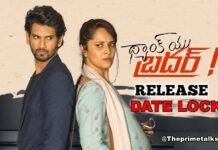