Khaali Peeli Movie Story: Khaali Peeli is a romantic comedy of a duo named Blackie and Pooja. Blackie (Ishaan Khattar) and Pooja (Ananya Panday) are two childhood sweethearts who get separated due to extenuating circumstances. Pooja becomes a child prostitute while Blackie goes on to be a Bombay Taxi Driver. Pooja on turning 18, escapes the brother she is in with a bag full of stolen cash and jewelry. She bumps into Blackie, whom she doesn’t recognize. Blackie offers to drive Pooja to safety for a hefty sum. With goons on her trail, she has no choice but to accept his offer. What will happen to them now? is the rest of the Khaali Peeli story.

Khaali Peeli Movie Review: Khaali Peeli is a typical feel-good light mass entertainer that is mostly done right. It is the screenplay with the right casting and writing that makes Khaali Peeli a breezy watch. The romance between the lead pair is established without too much melodrama. It is simple and effective. Still, the enjoyment of the Khaali Peeli movie depends on lead pair tolerance. If that is not a problem, Khaali Peeli Movie is a timepass affair, if it is, then it could be a nightmare.

Khaali Peeli Movie Verdict: Overall, Khaali Peeli Movie was marketed as a true blue masala entertainer that’s packed with all the quintessential elements of a Bollywood flick with a decent star cast with good acting skills. 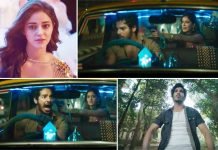