KGF: Chapter 2 stars Rocking Star Yash and Srinidhi Shetty in the lead roles. The two-part fictional mob drama traces the journey of India’s most dreaded criminal, Rocky. After losing his mother at a very early age to poverty and sickness, Rocky develops an insatiable urge for power. And his pursuit for power leads him to the (KGF) gold mines of Kolar, and a turf war ensues.

Directed by Prashanth Neel ‘KGF 2’ will have huge shoes to fill as its prequel was the first Kannada film to breach the Rs 250 crore club worldwide. The KGF movie ended with Rocky killing Kolar Gold Mine owner Garuda in his own den and thus becoming the new king of the mine. The sequel KGF 2, a Kannada language period-drama film, will be dubbed in Hindi, Malayalam, Tamil, and Telugu languages. 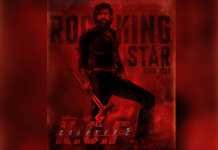