According to the latest update KGF Chapter 2 First Look Poster will be out on 21st December 2019 at 5:45 PM on social media. The team of KGF is gearing up to celebrate the first year anniversary on 21st December and they have decided to give a treat to the fans of Yash and the movie lovers. It is known the news that the first part of KGF was also released worldwide on 21st December 2018.

KGF: Chapter 2 is being helmed by Prashanth Neel and he has roped Bollywood actor Sanjay Dutt to essay the role of a villain named Adheera. Recently during the media interaction, Prashanth Neel opened up about Sanjay Dutt’s role and said, “Adheera’s character is very powerful. If you have seen the Hollywood movie Avengers, you would know Thanos. So Adheera is like him. Adheera is a very dangerous character with a dangerous get-up in KGF 2.”

KGF: Chapter 2 starring Yash and Srinidhi Shetty is directed by Prashanth Nee and produced by Vijay Kiragandur. The KGF 2 movie is scheduled to hit the screens in 2020, however, the makers have not revealed its release date. 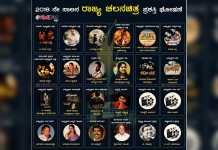