June 5, 2017
Facebook
Twitter
Pinterest
WhatsApp
Telegram
VK
The Kannada actress Avantika Shetty of RangiTaranga fame has mounted accusations of sexual harassment and unprofessional behavior on K.Suresh, the producer of her forthcoming movie Raju Kannada Medium, and also the film’s director Naresh Kumar and others.
As per The Times of India, a Lightman made a lewd comment against her and a technician inappropriately touched her during the shoot.After these experience, Avanthika Shetty has decided to stay inside her caravan after completing her portions during the shooting, but this did not go well with the director, who felt that she was not ‘friendly’ with others.
Now, the actress Avantika Shetty has opened up on the entire episode on Facebook through a letter, which has now gone viral. Read her side of the story here: 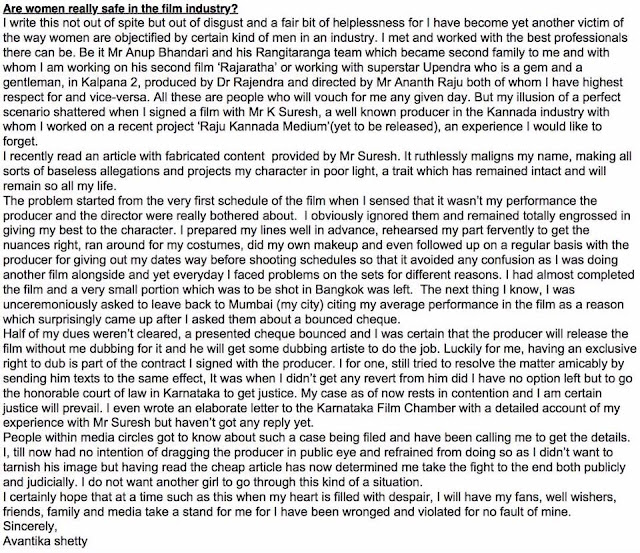 Suresh has clarified that the director’s comment was about Avantika shetty remaining secluded in her caravan during shooting. He also claims that it was a `stop payment’ and not a case of the cheque being dishonoured.According to him, Avantika has acted in the film for only 15 out of the 40 days she had signed up for. Avantika claims that 99% of her shooting is complete.
Facebook
Twitter
Pinterest
WhatsApp
Telegram
VK