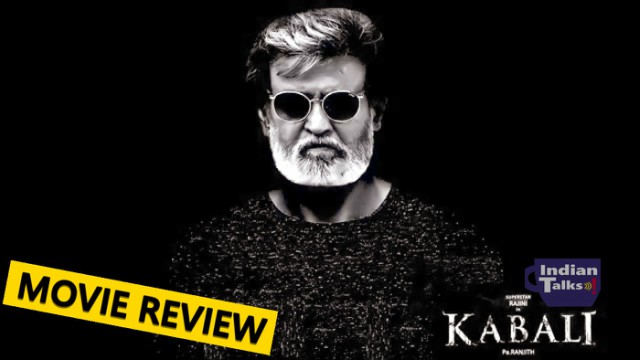 Kabali Story: The Kabaleeswaran aka Kabali (SuperstarRajinikanth) is a man who lives life with a purpose. He never allows anyone around him go into the wrong path. His wife Kundhanavalli (Radhika Apte) helps him out in all endeavors. He becomes gangster with the ideals of Seetharamaraju (Nassar) and ends up in jail.

He is released after 30 years after a deep thinking by the authorities. He finds that Kuala Lumpur has gone against his ideals while he is away in jail and he starts to sort out all the problems.His family is destroyed by Tony (Winston Chao) with him being in jail. Kabali goes on revenge on Tony for all the problems he created to people and him. How the Kabali does this forms the rest of the story.

Performance: Superstar Rajinikanth is terrific as Kabali. He pulled off his role with a lot of intensity and style. When he is doing a gangster based film, one will definitely expect his mannerisms and style to be same as Baasha, but he surpassed this and made it a delight with his Kabali swag. Actress Radhika Apte is perfect for her role and complements Rajinikanth well in all the scenes.

The Malaysian villain, Winston Chao is a great finding and stands up as a perfect villain against Rajinikanth. Tamil actor Dinesh as Jeeva is good and performed well. Dhansika as a sniper is well. Rithvika as Meena, a drug addict did well in her portions. Kalairasan is a role. John Vijay is perfect. Nassar as Seetharamaraju is good.Other actors performed well to the extent of their roles.

Songs: The background theme “Nippu Raa…Neruppu Daa.” and the introduction song “Okkade Okkadokkade…“ are awesome on the screen. and other songs, mostly pathos, are not appealing. Anyways, this is not a movie that banks much on its songs.

Verdict: Kabali movie that launched with extremely high expectations and fails to reach them. The movie will open to mixed talk on the first day. We will need to wait to how it fares on the second day and going forward. The Tamil version may fare better than Telugu. Watch with no regret and enjoy watching the ultimate star of our era – The Superstar Rajinikanth’s one man show of Kabali!