A ZEE5 Originals Released Kaafir Web Series Season 1 Starring: Dia Mirza, Mohit Raina, Dara Sandhu, Abhiroy Singh, Sapna Malhotra, Siddartha P. Malhotra, Pratik Shah, Kavish Sinha. Based on the true story of Shainaz, Kaafir Web Series Season 1 follows the journey of an innocent Pakistani girl who faces an unlawful jail term of seven years after the Border Security Forces mistakenly consider her a militant and how she breaks away to gain legal entry into Pakistan. Prominently placed amidst saddening Indo-Pak socio-political scenario, the narrative of Kaafir is not only beautiful but also relevant. Helmed by Sonam Nair, the series comes from Bhavani Iyer’s screenplay and concept.

Commenting on Kaafir, Dia Mirza said, the Kaafir is a story which will surely stay with me forever. Essaying role of Kainaaz took an emotional toll on me and I cannot even imagine how the woman on which the story is based must have braved these incidents in her life. I hope every Kainaaz finds her Vedant. I am happy that ZEE5 backed this project and it will now have a chance to travel beyond borders and touch hearts.”

Sharing his perspective Mohit Raina said – Kaafir web series is a compelling story and it is important for it to reach a larger spectrum of audiences. The story has been shown from the perspective of my character, Vedant and each element of the film has been beautifully tied together. The show marks my digital debut and I could not have asked for the better platform than ZEE5. We have tirelessly worked on this and I hope it makes the audiences stop and ponder.” 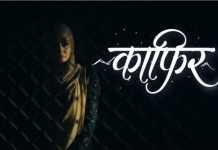