JUMANJI The Next Level Official Trailer Released out by Sony Pictures Entertainment. The JUMANJI: The Next Level movie is a sequel to the 2017 film Jumanji: Welcome to the Jungle and the fourth installment of the Jumanji franchise. The nearly 3-minute JUMANJI 3 trailer is a fun ride and it’s a delight to watch the ensemble cast coping up with a chaotic adventure. The JUMANJI The Next Level Official Trailer opens up with Spencer (Alex Wolff) trying to fix the game and return to Jumanji.

But it gets busted. Following which, his oddball group of friends from the first film goes back to the world of Jumanji to save him. Upon their return to Jumanji, they discover that nothing is as they expected. It’s a delight to watch the ensemble cast coping up with the chaotic adventure.

In Jumanji: The Next Level, the gang is back but the game has changed. As they return to Jumanji to rescue one of their own, they discover that nothing is as they expect. The players will have to brave parts unknown and unexplored, from the arid deserts to the snowy mountains, in order to escape the world’s most dangerous game. 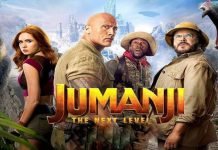