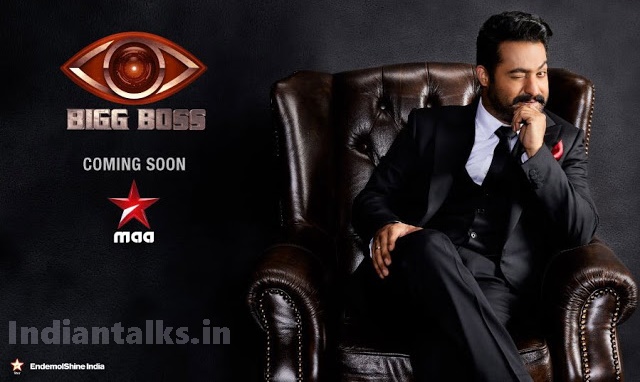 BIGG BOSS Telugu: We had earlier reported that Jr NTR will be hosting the Telugu version of Bigg Boss on a popular Telugu channel. And now officially confirmed by Star MAA Telugu.While Chiranjeevi and Nagarjuna’s names came up, owing to their TV stint with Meelo Evaru Koteeswarudu, it has now been learned that Jr NTR will host the television reality show.

Alok Jain, Business Head of Star Maa said “We are extremely excited to launch Big Boss, the biggest reality show in the world, for the first time in this market. This is in line with our ambition to entertain & provide Telugu audiences with the best content ideas from across the globe. With Junior NTR, one of the most popular and revered Telugu stars as the host, we look forward to engaging a diverse spectrum of viewers. On the show, our endeavor will be to continuously innovate keeping in mind the sensibilities of this market. This will be an experience unlike any seen on Telugu TV before”
The Star MAA channel which will broadcast the show posted a message about the show and posted a message which read – “Welcome to the @StarMaa family Young Tiger @tarak9999 for Biggest Show Ever #BiggBossTelugu.”
Jr NTR also confirmed that he will be hosting the Telugu version of the reality show Bigg Boss Telugu. The actor posted a picture on wrote – “I can see you #BiggBossTelugu.”
“Television is one of the biggest mediums for entertainment. When I was approached by Star MAA to host BiggBoss, the biggest ever show on Telugu Television, I was intrigued by the challenge. I believe that the show will be a game changer,” _said Jr NTR.

Jr NTR will be making his debut on small screen with Bigg Boss and this is being considered as one of the biggest career step in NTR so far.
Facebook
Twitter
Pinterest
WhatsApp
Telegram
VK