Jr NTR 33rd Birthday Special: NTR-Nandamuri Taraka Rama Rao jr was born on 20 May 1983 in Hyderabad, Andhra Pradesh. NTR has done his schooling from Vidyaranya High school and completed his intermediate from St.Mary’s College, Hyderabad. He is the son of Nandamuri Harikrishna (NTR’s son) and Smt. Shalini. He is fondly called as Tarak by his family, friends and close associates. Later, he changed his name to Taraka Rama Rao in honor of his grandfather. Many cine and political analysts believe that he is the next big star from the Nandamuri family.

Jr NTR is the mass entertainer in Tollywood film industry. He is a Telugu film actor, playback singer and also accomplished Kuchipudi dancer. In 1991, he has made his film debut at the age of 8 in the movie “Brahmarshi Viswamitra”. Some of his box-office hit films are Aadi, Simhadri, Yamadonga, Adhurs, Brindavanam, Temper and Nannaku Prematho. He has won two state Nandi Awards, one Filmfare Best Telugu Actor Award and three CineMAA Awards.

1. Jr NTR acted in Sr.NTR direction in Brahmarshi viswamithra (1991)
2. Jr.NTR won Yuvakalavahini award, Bharathamuni arts academy award and AP cinegoer’s association awards when he was just 10. He played Lord Rama in Balaramayanam. The film was directed by Gunasekhar.
3. Jr.NTR is a classical dancer who is very good at performing Kuchipudi dance form. He is considered as one of the very few best dancers in Tollywood.
4. His first film in lead role was Student No. 1. However, the first released film in which he appeared in lead role was Ninnu Choodalani. The film Student No. 1 got released only after Ninnu Choodalani.
5.NTR Box-office hit films are Aadi, Simhadri, Yamadonga, Adhurs, Brindavanam, Temper and Nannaku Prematho.
6. Andhrawala is the first ever film in Tollywood which have a massive audio launch and the following pics says it all. NTR – Craze ka Baap.
7.Jr.Ntr won two state Nandi Awards
8.Jr.NTR is married to Lakshmi Pranathi on 5 May 2011 at Hitex Exhibition Center, Madhapur. Pranathi is the daughter of Srinivasa Rao, who is the owner of a Telugu news channel “Studio N” and also the relative of Jr NTR’s uncle, the current Chief Minister of Andhra Pradesh Chandrababu Naidu.
9. Jr NTR and his wife Lakshmi Pranathi had welcomed their son on July 22, 2014.
10.NTR is the only actor from Tollywood who established a fan base in Japan. 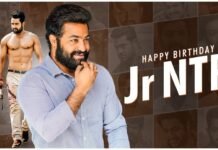