Jathi Ratnalu Movie Story about Srikanth (Naveen Polishetty) runs a ladies emporium in his native place Jogipett. He is ashamed of his family business and dreams of getting a job and settling down in Hyderabad city. Soon, Srikanth and his friends Shekhar (Priyadarshi) and Ravi (Rahul Ramakrishna) move to Hyderabad. Some unexpected events lead the trio to occupy a vacant flat in a posh area, and Srikanth soon falls in love with Chitti (Faria Abdullah), the charming daughter of their neighbour. However, their lives change after they cross paths with Chanakya (Murali Sharma), a politician. it manages to be a rib-tickling viewing experience and also get its point about class divide across. 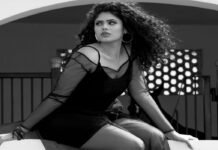