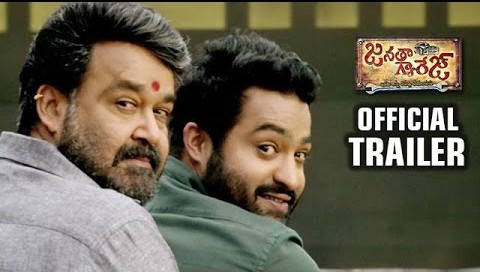 Janatha Garage Telugu Trailer : Janatha Garage Which is an action film directed by Koratala Siva and produced by Naveen Yerneni, Y. Ravi Shankar, and C. V. Mohan under their banner Mythri Movie Makers. It features Mohanlal, Jr NTR, Samantha Ruth Prabhu and Nithya Menon in the lead roles. Kajal Aggarwal will be seen with Tarak in a special appearance in a song.‘Janatha Garage’ stars NTR with Mohanlal playing godfather kind of role.Janatha Garage Music is Composed by Devi Sri Prasad.This film also stars Devayani, Saikumar and Ajay in supporting roles.Janatha Garage Jukebox.
Janatha Garage Trailer Review : Janatha Garage Film action packed kick-ass and is surely going to make our wait for the movie excruciating.It shows us the silhouette of NTR against a sunset, pondering over a feared man. The background score of trailer is totally setting the pace for the film! It’s blowing our minds, and then, Jr.NTR delivers his killing blow. and then Mohanlal makes his subtle yet epic entry as a simple man. as everyone passing by takes a moment to greet him.But did you notice that the trailer focussed only NTR? Well, looks like the teaser was tailor made for only his fans. Watch  Janatha Garage Audio Launch Live .