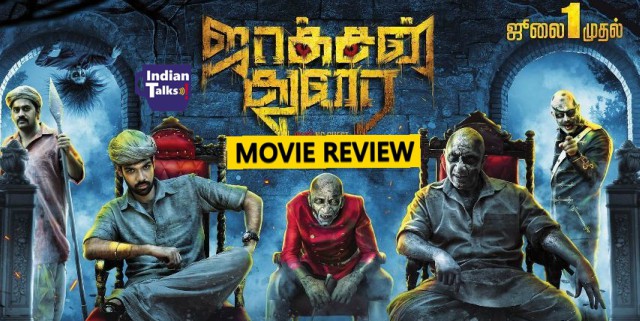 Jackson Durai Review : Director Dharani Dharan is back with the comic thriller starring Satyaraj and his son Sibiraj. Karunakaran, Rajendran and Bindu Madhavi play very crucial roles in Jackson Durai . Let’s see what Review says!
Jackson Durai Story: The Jackson Durai Movie story begins with the people of a small village being plagued by the spirits of some British soldiers and a British Lord, called Jackson . Satyaraj (Sibiraj) is an overenthusiastic police officer, who has not taken up any assignment since the time he had joined the police services as an SI. He is now sent to village to solve the “spirit” menace.
As soon as he lands in the said villages, he meets (Bindu Madhavi) and takes a liking for her. He then learns about the bungalow which once belonged to the erstwhile British Lord, who is still haunting the villagers. After a few ghostly encounters, he realizes that the bungalow is truly haunted, with a few spirits which are yet to depart. The movie then goes into the flashback, where a revolutionary (Satyaraj) and his men had rebelled against Jackson, who shoots and kills them. Before dying, Satyaraj vows to take as many lives as possible to kill this evil British officer, and hoist the Indian flag through his chest, thus bringing peace upon himself and the other tormented souls.How Satya join hands and end Jackson’s “life” is what is the rest of the story.
Performances: Except Yogi Babu, nobody else has managed to evoke laughter, which is one of the weakest links of this movie. Sibiraj looks out of place and is a serious miscast. Actor Sathyaraj‘s character might make you wonder why he took up this role in the first place. However, the veteran has done what is required. Somehow, the idea of casting Rajendran in a horror-comedy is going overboard, one might feel. He neither spooks nor amuses.
Analysis: The Director Dharani Dharan tried to being in the concept of time lapse, where spirits are stuck in their era and are unable to move on even after centuries passing by. He also wanted to include humour into the movie, which seemed a little silly after a while. What beats the audiences’ intelligence is that spirits are shot with bullets and machine guns, of this generation. Now anyone with even half a brain would want to question this brilliant theory!
A few scenes with Karunakaran and Sibiraj are pretty funny. A special mention to the cute little British ghost boy, who seemed rather confused with all that is happening around him. The computer graphics are pretty neat, while the background score is good only in a few specific places. With a thin and small plot as this one, the director tried to drag it until the audience literally lost their patience waiting to know what was happening. The story and the plot are as thin as a sheet of ice, and had it not been for the comedy, the movie would’ve had a bad slip and a fall!
Jackson Durai Movie Rating – 2.5/5

Final Verdict: Jackson Durai Film has its moments, but the whole purpose of the movie goes for a toss, to its poor execution.
Advertisement