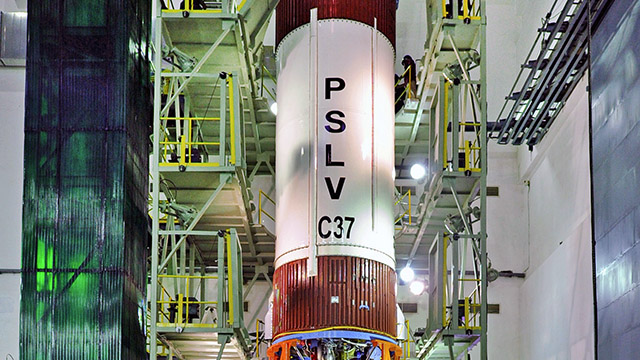 ISRO PSLV-C37: The Indian Space Research Organisation set a record on Wednesday with the successful launch of 104 satellites on board a single rocket, PSLV-C37, from the spaceport of Sriharikota in Andhra Pradesh. The India has become the first country to have launched 104 satellites on a single rocket.
After a normal lift-off, the rocket passed the phases successfully and all 104 satellites were separated successfully at about 10:00 am. Following this, the ISRO team behind the launch applauded and congratulated each other. The Prime Minister Narendra Modi also congratulated the team, saying, “Keep it up.” “Congratulations to ISRO for the successful launch of PSLV-C37 and CARTOSAT satellite together with 103 satellites,” the Prime Minister tweeted. President Pranab Mukherjee also congratulated ISRO for the successful launch of PSLV-C37, saying the nation proud of this achievement.
Advertisement
The PSLV first launched the 714 kg CARTOSAT-2 Series satellite for earth observation and then injected 103 co-passenger satellites, together weighing about 664 kg at lift-off into polar Sun Synchronous Orbit, about 520 km from Earth.
ISRO’s trusted workhorse Polar Satellite Launch Vehicle PSLV-C37, on its 39th mission, launched a record 104 satellites belonging to international customers. Of the co-passenger satellites, 96 belong to The USA, five to the International customers of ISRO — Israel, Kazakhstan, Netherlands, Switzerland, United Arab Emirates, respectively.

The nano-satellites belonging to international customers are being launched as part of the arrangement by Antrix Corporation Ltd (ANTRIX) the commercial arm of the ISRO. Two other Indian nano satellites, weighing about 1,378 kg, also rode piggyback in the rocket.