Indian Style icon Allu Arjun: Twitter trends have now become the norm for fans of Star Heroes in Tollywood. Every Star Hero fan keeps their hero on Twitter top trend with a hashtag. On Saturday, Allu Arjun was at the top of the Twitter trend. With the hashtag #IndianStyleIconAlluArjun, Bunny fans put their hero on top trend by making millions of tweets. They are posting something related to their hero and attaching this hashtag to it. ‘Indian style icon Allu Arjun’ is the trendsetter.

However, there is a reason for Stylish Star Allu Arjun fans to suddenly come up with this trend-setting idea. Allu Arjun and Trivikram Srinivas’s combination blockbuster movie ‘Ala Vaikunthapuramuloo‘ has set an all-time industry record in TRP ratings. The movie ‘Ala Vaikunthapuramulo’ which aired on TV recently got a 29.4 TRP rating. So far no Telugu film has received this level of TRP rating. That is, ‘Baahubali 2‘ also crossed the ‘wave’ record. Hence, Allu Arjun fans are on a good swing. This is how the trend is being set on Twitter.

Let’s Reach 4M before 12AM pic.twitter.com/IZh1cf0NWG

Meanwhile, ‘Ala Vaikunthapuramulo Movie’ released for Sankranthi broke all the records of ‘Non-Bahubali 2’ at the box office. In terms of music, ‘Ala Vaikunthapuramuloo‘ is creating records upon records. It’s been 6 months since the movie was released on the OTT platform. Many people have already watched this movie many times through OTT. However, the film aired on TV and was well-received by television audiences. However, Harika and Hasini creations, Geetha Arts banners Allu Aravind, Radhakrishna (cinababu), the heroine of this film starring Pooja Hegde. SS Taman composed the music. 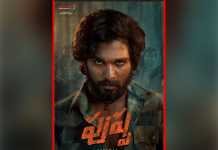