The Indian Government Bans 59 Chinese Apps in its notice stated that these apps are prejudicial to the sovereignty and integrity of India, defence of India, the security of the state, and public order. The Centre has stated that it has received many complaints from various sources including several reports about the misuse of these apps for stealing and surreptitiously transmitting users’ data in an unauthorized manner to servers that have locations outside India.

Hence, in a move to protect the sovereignty of Indian Cyberspace and to ensure the interests of crores of Indian mobile users, the government has stated that this was a major blow to China’s Digital Silk Route ambitions. This move comes amid the ongoing India-China standoff at the Line of Actual Control (LAC). The entire list of 59 apps was included as an Annexure and it includes everything from chat apps, to tools such as ES File Explorer, to games. It’s hard to understand why these specific apps were chosen. The Indian Government Bans 59 Chinese Apps as follows.

After 20 soldiers were martyred at the LAC, several groups across the nation have protested against the sale of Chinese goods. Moreover, the Dedicated Freight Corridor Corporation of India (DFCCIL)- a PSU under the aegis of the Ministry of Railways has terminated a Chinese company’s contract.

The BCCI too has called a council meeting to rethink its sponsorship from Chinese companies. Centre too has taken several steps to decrease Chinese imports to make India more self-reliant. Apart from these, recently several Indian companies with Chinese funding have faced the ire of the public as ‘ban Chinese goods’ sentiment grows stronger. 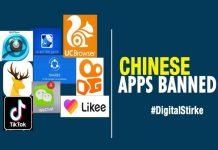