Here A 1-minute IIT Krishnamurthy Movie Teaser kicks off with a missing poster of the protagonist and the following incidents leading to it in a pacey mode. The Police doubt his involvement in the crime which took place in the corporate world and he too seems to have some hidden secrets in his armory. Actor Prudhvi Dandamuri is playing the titular role in IIT Krishnamurthy with Maira Doshi being his leading lady.

According to the IIT Krishnamurthy Movie makers, a few scenes in the movie which are inspired by real-life incidents have been realistically shot to deliver frills and thrills to the viewers. The IIT Krishnamurthy Full Movie is bankrolled by Prasad Nekuri under Crystolyte Media Creations banner. Vinay Varma, Bharathi Anand, Banerjee, and comedian Satya are essaying pivotal roles in the film. 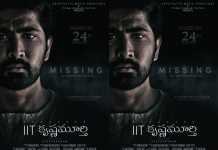