Home Politics Human Hair Worth Around Rs 10 lakh Stolen From Temple
Human hair worth around Rs 10 lakh was stolen from the premises of the famous Varaha Lakshmi Narasimha Swamy Temple near her, police said on Tuesday.Unidentified persons stole 10 bags of “special grade” human hair valued at around Rs 10 lakh from the temple at Simhachalam, they said. 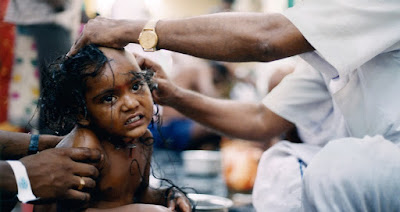 Preliminary probe suggests that temple insiders may be involved, DCP (Zone-II) G Ram Gopal Naik said. Thousands of pilgrims visit the shrine every day from various parts of Andhra Pradesh and neighbouring Odisha and Chhattisgarh. Devotees tonsure their head and offer the hair to the deity there.
Staff of Kesh Kandana Sala (tonsuring centre) of the temple collect the hair and segregate them as per length and quality, which is then auctioned.
Executive Officer of the temple K Ramachandra Mohan said around 15 bags containing “special grade” human hair were stored in a room near the Kesh Kandana Sala of which 10 bags were stolen.
The thieves entered the store room of the temple, from the terrace using a rope. They cut the grille door on the terrace to enter the first floor and then unscrewed the pivot
to gain entry into the store room, temple sources said. On a complaint filed by the temple management, police inspected the spot and pressed dog squad into service to gather clues.