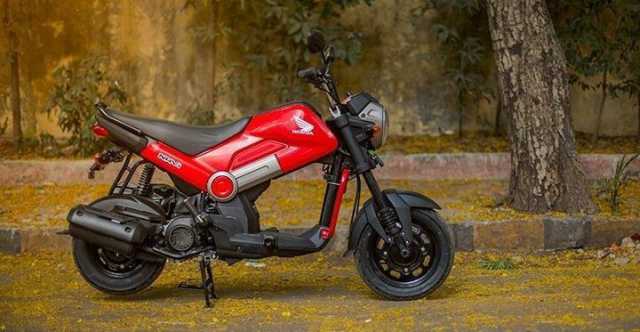 The Honda Navi has entered the top-10 scooter sales list

Advertisement
In today’s day and age being different is something that is very important for consumers. Honda tried to do the same and unveiled the Navi – hybrid of a motorcycle and a scooter. The Honda Navi is the first two-wheeler offering that has been developed by its R&D facility in India and was launched at the 2016 Auto Expo. The Honda Navi was a brave move and what really surprised many was that Honda which is traditionally associated as a conservative manufacturer came up with something so quirky.
Well, this different approach has clicked for the Japanese two-wheeler giant, as the Navi sales crossed the 11,500 mark for the month of July, 2016. This allowed the Navi to break into the top-10 selling list for scooters in India with overall sales of 11,644 units. The quirky styling, ease of use being an automatic and the fact that it has been priced at just Rs 39,648 (ex-showroom Delhi) seems to have worked for the Honda Navi in attracting its target youngsters.The Honda Navi a desirable runabout for daily errands, quick dash to college and a lot more.
Given the rise in demand for the Navi, Honda Company also had doubled its production for the minibike. The engine on the Navi is the same 110cc unit as seen on the Activa producing 8PS of max power and 9Nm. The Navi gets a 3.8-litre fuel tank and has a claimed mileage of 60kmpl. Honda currently sells the Navi in just 10 cities across India and has plans to further expand its reach to other locations by the end of this year which should further improve its sales.