Hippi Devadas (Karthikeya) completes Engineering and Begins Training in Martial Arts. He falls in love with Sneha (Jazba Singh). While they go on a long drive, he falls for Sneha’s friend, Amukta Malyada (Digangana Suryavanshi). He avoids Sneha and goes after her. Sneha moves on and Amukta makes Hippi’s life hell with her conditions. What happens when she opts for a live-in relationship with him forms the crux of the hippi story.

TN Krishna has come up with an interesting subject for Hippi, which will connect with the youth. Hippi is a story of a guy who feels his freedom is lost because of his love. So this is a film which begins with a statement called “Love is bad ” and ends by giving you a good impression on love. The first half is laced with many youthful elements with some double meaning dialogues here and there. The second half starts with the frustrated mentality of Hippi and goes into the routine mode of every love story with explanations, plans to make the other one know the value of love, etc. Read (Seven Telugu Movie Review).

Actor Karthikeya appears in a different avatar in Hippi and his electrifying performance is the highlight of the film. Digangana Suryavanshi has done a good job and her chemistry with the hero is one of the attraction. JD Chakravarthy and Actor Vennela Kishore’s comedy timing are big assets of the hippi movie. MD ASIF, Jazba Singh, and Shraddha Das have done justice to their roles.

The Hippi Full Movie is a modern-day romantic love story with bold & unconventional storytelling, dealt wid abnormal cuts. The film intelligently reflects present-day millennial mindset in its approach. Actor Kartikeya has given a fabulous performance and proves his worth as a future star. Digangana Suryavanshi is top notch as the heroine with the promising screen presence. TN Krishna has done an appreciable work. Overall a good film. For those with a tinge of gullible mindset and a beguiling heart, this film is a winner. 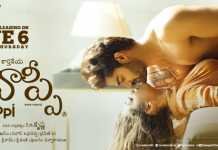